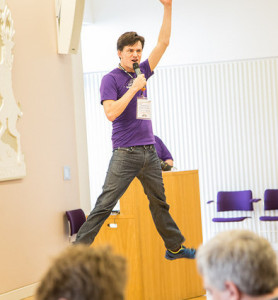 The digital innovative movement is embracing open data at the moment, and Open Data Day usually sees a whole host of events across the UK. This year was even more exciting with the launch of Open Data Camp, organised by a group of volunteers with some strong sponsors backing them, and so I travelled all the way to Winchester for the two day unconference. Due to a very packed working week before-hand, I was grateful in seeing James Cattell who compère the main session with tons of energy and a very high star jump. People pitched their talks and then we all gathered around a board to see where they had been placed, naturally with disappointment when interests clashed.

Stirred up by voluntary work I do, I went along to a session on charities led by Pauline Roche and Tracey Gyateng, and then a session on youth homelessness where Gaia Marcus was wanting ideas and help trying to add transparency to the £3.2bn spent annually across the country. The first session had the benefit of Drawnalism and live blogging recording the session as it took place. The open discussion really reinforced my view that a lot of benefit could come from helping some charities use and publish open data, if only I had the funding or time to dedicate to another project. Although the discussion mainly focused on data relating to funding applications/reviews and the fears from both sides, I think there’s a lot of potential from data for organisations to understand and share information of the scene they are in, not just the effectiveness of their work. 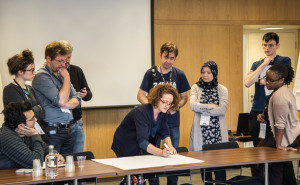 There were multiple discussions relating to food over the weekend. Lots of conversations flowed around Sian from the Food Standards Agency(FSA), in addition to checking with her that lunch and dinner were safe (they were definitely yummy and plentiful!). Lots of discussion on how more use could be made of the data they release. We all love Scores on the Doors but there is potential to show historical data and apps for specific allergies alerting when mistakes on product advice have been made. To compliment Sian, we also had Vince and Flo from Open Food Facts showing off (even in the pub) the crowd-sourced database and app that scans barcodes (or recognises the packet) and can return ingredients and nutritional information. Just think about combining that API with the FSA allergy alerts. I also think it would be good to investigate what (if any) information systems are used by food banks, then extending that with Open Food Facts to expand on statements like “we gave out 8,000kg of food” with “we kept people going with x,000 calories and food that was half the sugar content of last year”. OCR reduces the amount of typing needed to contribute, so I’ve started scanning and photographing a few items in my kitchen cupboard.

The second day of the camp had significantly less people and a much more relaxed atmosphere as if we were close friends. I even pitched a discussion titled “When open data and is FUN and normal!” to share stories contrasting the horror stories session the day before. I shared some graphics I created from political open data and was surprised it existed so I could answer questions. Questions that I had no reason to care about other than it might be fun and silly to know the answer, a separate blog post coming soon on that. There were a few gaps in the sharing of stories, but no awkward silences. From the stories we concluded that even when we try to build things with data, even fake/lying data, to be silly or stupid it turns out to be really helpful either to ourselves or someone else. I suppose that’s what you get from not staying locked up in a data silo. 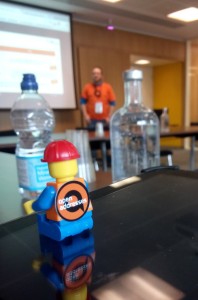 Last of all, I want to make a mention of Open Addresses. They held many sessions, but I didn’t get to one until the second day when they asked for hack ideas for their website. They’re not using OpenStreetMap data due to deciding on incompatibility with the “share alike” part of the open license. It’s a shame to duplicate work, and I personally think it would be fine as they use the same license they just need to find a way to attribute OpenStreetMap (and potentially each contributor or link back to the source object) when an address is derived. My first suggestion was to take county/constituency property stats and make a map of comparative completeness, similar as ITO World did for OpenStreetMap compared to Ordnance Survey road names. I won a lego minifigure for that being the best idea. My later suggestion I would like implemented more, and that was to find addresses in OpenStreetMap and semi-automatically contact the OSM user saying “You have contributed X addresses, would you like to import them into Open Addresses”. The message would have a big “yes” button that records their permission being granted and then does the import. The import could include linking the datasets by saving the external ID in each of the projects, and could even automatically import any additional addresses from the user as they continue to contribute to OpenStreetMap. OpenAddresses has the benefit of building a postal address lookup and offering different formatting, while OpenStreetMap can be used to direct you to the physical location or in some cases display detailed building outlines.

The feedback session was too long for my liking. Someone even brought up the “not enough diversity” gripe, and sure there weren’t many women in the feedback (sensible people had left by then?) but the photos confirm my feelings that overall it was very well gender balanced, think more of the minority beard owners in attendance! All in all, what a fantastic unconference and a pleasure to be at the first one. I connected on an informal way with lots of people and will probably see them at future events. There was talk about it being hosted in Manchester or elsewhere North next year, that would get my support.

Correction: Initially I stated the unconference was organised by the ODI, which it wasn’t. Perhaps the volunteer team did so well that I assumed they must have been a well established organisation that runs open data events throughout the year. Please accept my apology and compliments to both sides.