App ideas for the North East

This should interest motorists in particular, although there is interest for public transport users & city walkers too. The Digital Catapult and the North East Combined Authority (neca) are making great steps to support open data in the region. I’ve been to a few events in the past where they’ve released data openly so that innovative and creative use can be encouraged. Their Data Movement website is running a competition, and although it’s sadly restricted to phone app ideas, I entered a few ideas of how their data could be used (and combined with other data). There is now a vote, and I would encourage everyone who lives or works in the region to vote on what they want to try out (you could even win an iPad). 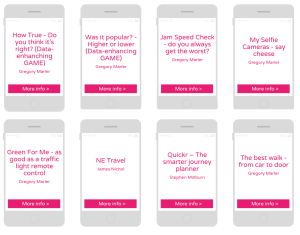 I can’t link directly to the entries, but I want to comment on some I like. You can use Cntrl+f on the entries page to search for the title of the entry.

Search “Marler” on the page to find my ideas, which are possibly the best ideas to vote for. 😉 I came up with a few game ideas, and some clever apps such as helping motorists always meet traffic lights when green. If you vote enough, I’ll make them.

Drive Buddy wants to be used briefly before you get in the car. That’s a unique idea and safer use of a phone.

Orb is an app for me. It could let me hit snooze on my alarm more often, or when traffic is really bad then I know I *have* to get up to avoid being late.

Tyne Crossing Planner is good in being a specific focus. It means yet another navigation app to install, but explains it is for regular/specific users.

SmartPark I like as it encourages motorists to switch to public transport for those grid-locked last few miles. Similar to my The best walk app, and also my One stop earlier idea which encourages you to get of the bus and take a walk through a park to burn calories.

Tolon Air Pollution Alerts and BreathEasy are the few apps to use the air pollution data. Although, what can you do if alerted that pollution near your office is very high today, ask your manager for the day off?

Camera Control makes a funny suggestion that the CCTV operators would use the phone app to watch their cameras. They need to leave the big screens and go to the toilet at some point! In Durham there are two CCTV operators for that reason, so this app could lead to redundancies and budget cuts (good for some, but not the staff). 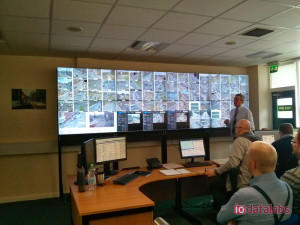 Car park finders – there are several entries of the same ilk so none spark me as an amazing idea. It’s more likely we’ll see the data incorporated into the many existing navigation apps and car park finder apps that are starting to appear, they don’t even need to enter the competition. Out of them all, NESpace at least suggests some good added features. Do you want a car parking app for every town you ever visit, or one national/global one? Some of the entries even claim they can book you a space, tricky when the data is read-only!

Transport and bus apps – these don’t use data released as part of the competition, so I’m not sure how they qualified through to this stage. Public transport data is starting to open up more, often still at a prohibitive license or technical cost. I like Robert’s “Transport Tracker” and have desired doing something similar. One app that didn’t use any open data at all was “The Student Saver”, while “Experience Newcastle” made a tedious link.

So please go online and vote for the ideas that you think should be built! The top three will get £5,000 if they build the app. Runners-up might choose to build them anyway if the votes showed they were popular.