The North East is continually getting more involved in open data, but also in the councils working together on the subject. So it was a great privilege when Paul, from Newcastle City Council, invited me to be one of the “innovators” at the Innovation Lab event in Newcastle. One of 3 events connected to Data Mill North (formerly Data Mill Leeds, but we do just as much up here!), to look at “Living healthy and independent lives in our local communities”. 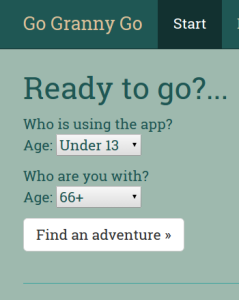 I was assigned as the innovator/developer for a table focusing on health, with the added event theme of older people. We initially focused on helping people be a little more active, by encouraging them to go outside for a walk. However we had so much to shoehorn into our idea. The uptake of the flu vaccination needs to increase, and educating people about various health screenings. Phew, I made a 20 minute head start on development before lunch, then had a brisk 3 hours to get something out.

Not going for mocking up fake screenshots, or even developing features I had done before, I got to work. There was a focused but friendly atmosphere in the small “theatre” room of the Northern Design Centre in Gateshead. Our idea had a great hook to have tech-savy folk work together with someone who would mutually benefit from the walk or the information. Our key thought being device-obsessed youngsters looked after by a grandparent. Achieving small milestones would end in a final trip being finished. Health myth-busting and surveys would be mixed up with local trivia and conversation starters. Finally they would be incentivised to visit nearby leisure facilities and cafes that conveniently had information relating to what they had learnt.

I managed to get enough done in order to present a workable prototype, and demonstrate a number of different outputs from the project. I was excited about all the point data that could be drawn out of OpenStreetMap, and perhaps supplemented by some council-produced data. There will be a judging phase of the filmed pitches, after which additional support may be awarded. However Paul and the team were keen that conversations and further work may naturally spin out of the day and discussions made.

Perhaps I may later write further, and have a full prototype or finished product to present to you. More work needs to be done on the project name…