Ahead of the Thinking Digital Art Hack I was skeptical. With only 4 hours execution, and a short day in total, could something be discussed, planned, and created worthy of a public art exhibition? We started the day with an introduction of the materials & equipment lent from 3 local organisations, not overwhelmed by material details but knowing who to ask for help. Our pre-sent answers to the theme “decentralisation” and the mediums we work in were stuck on the wall with washy tape “mapping” links and groups of people. I started to worry and become more skeptical about success chances. It looked like I was about to be grouped with people too similar to me, and without the graphic designer I’m always told I need. 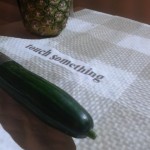 I had touched on a few organisations I was involved in, Durham Foodbank management being decentralised from the UK-wide Trussel Trust network and Carlisle Food Hub that runs independent of any national shopping website so it can bring change locally. All my thoughts were picked up by the group, especially by Colin who added his knowledge of permaculture. We put effort into avoiding a museum tool “this is where your food comes from” and tried to embrace permaculture zones that organise produce by distance. It makes sense to grow salad in your back garden to check it’s watered & fight the pesty snails, while fruit trees and sheep can be kept a few miles from your constant view. I should have photographed our original sketches which showed permaculture zones are expanding circles from one person with a higher-level view of many small & overlapping bubbles of production that share food and help neighbours in need by giving away surplus. 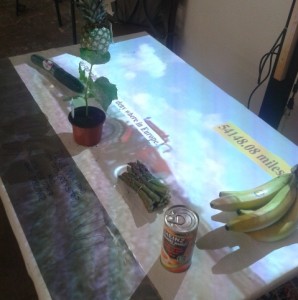 The finished product was 6 different food items that Colin bought locally but grown varying-distances away, presented on a dinner table. Mounted behind the table was a projector that shone down to light up the produce and display a pattern on the table cloth. Visitors were directed to place one hand on a conductive area of the table, and touch one of the items with their other hand. This triggered the table cloth to change to a photo and present a message about the item. The potted cucumber plant had messages like “a new leaf grew today”, “I need lots of water”, “this is a hella cucumber variety” and there were several different photos you might get. One in four times you would get a video. By contrast, touching the bunch of bananas told you simple and similar messages such as “The banana is from Ecuador” or “The banana departed on flight FA276”, the same picture was always displayed. A counter in the corner added up the miles each time a touch was made. We didn’t want to focus on food miles and typical education, the aim was for subconscious encouragement to repeatedly touch the nearby produce and less for the distance produce. This association could then be connected with knowing what to pick up from shops frequently.

I don’t remember who by or how the “Makey Makey” got suggested, but this made the project possible in the time available and shaped what we did. Ever so simple to use, clipping a wire onto each fruit, another onto the table, then a usb plugged into my laptop and without the need for software installation the fruit acted as a computer keyboard. I was able to use my quick programming environment of choice, an ugly HTML webpage with some javascript/Jquery that had very simple statements along the lines of “when down key pressed, display banana message”. Colin was out of the room, either out buying items or in the makerspace hammering-together a stand for the projector. Ian did some project management then took care of extending the electronics and poking holes in the cloth to make our table display appear wireless. Under the table was a mess of unlabelled wires to add fun to “hardware” debugging. Tom focused on research, so the miles could be totted up and informative messages displayed. Due to internet connectivity issues, and continued time pressures, not all the research got used sadly. 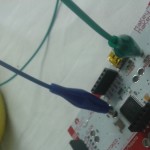 Naturally there were issues with the code and finished product. The messages displayed needed more time spent planning them, and the produce selected might be different if planned in advance. Using the makey makey the conductivity of each item was important, and threw up some surprises. The asparagus performed better after some water-soaking time and the “farmers’ market inspired” tin of soup needed to have a coating sanded off before any connection got made. Detection via camera could be an alternative input, but not as fun. An extra few hours on the code would have smoothed most issues that sent the food mile counter whizzing up up. All in all we got a delicious piece finished enough to show off and I had a great time in the process.

This entry was posted in Thoughts. Bookmark the permalink.