OD Camp 2: Edible Giving launches, with a side of map editing 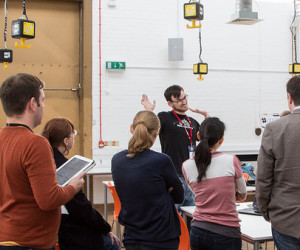 Having found February’s Open Data Camp (#ODcamp) to be really beneficial and rewarding, it was without a doubt that I was going to go along when the organisers brought it closer to home ‘oop North in Manchester. I could only attend the first day, and I feel I missed some of the best sessions while I led sessions myself. Ah, maybe that’s a good reason for me to write about what happened in my groups for those that missed them.

First up was talking about food, that seems to be a theme of the Open Data Camps. Having had an idea in my head, talking at the first #ODCamp gave me motivation to go ahead and create a prototype website called Edible Giving. The prototype demonstrated how general members of the public would be able to easily find and contact organisations where they can donate food to help those in their local communities that are struggling for the most basic need of eating. Since the prototype I’ve had some funding to develop the website further and with that done I launched an improved version at #ODCamp earlier this month. After demonstrating the website a group of about 15 discussed it’s potential impact and ways to improve it. We side-tracked for a bit onto problems reducing food waste (not the main aim of Edible Giving or the aim of all organisations shown). I think the general conclusion was that the website needs to be simple for people are aren’t involved in the projects or subjects of food donations, and just want to make a quick contribution on their way home from work. Some small suggestions were made that could make it clearer and more direct, perhaps an option to only show places open on the current day and to focus on donation places, not the hand-out or volunteering places of the organisations publishing to the website. 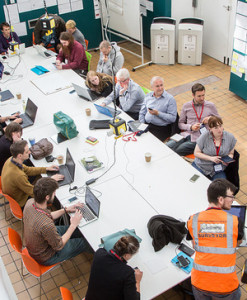 In the afternoon I led a session on how to edit OpenStreetMap, just in case there was anyone who wanted to contribute but hadn’t. I was overwhelmed as we kept bringing in more chairs to seat 20 of us around the table. With around 30 minutes it was going to be tough to give an in-depth introduction but almost half had laptops open and might have tried to follow along. I’d like to know if anyone did make edits, or has done as a result of the workshop. I introduced the data types of OpenStreetMap, the key=value tagging concept, and then demonstrated some real-world improvements based on our lunchtime research to an unmapped burrito place. Rather than try to cram more practical learning in, I answered the wave of questions and conversations people had. Looking at the data and history, how to tag alternative names of buildings, and many other topics that I’m used to. All queries are often similar in answer, it’s always wonderful to hear the varied interests and thought people have as they come to OpenStreetMap and understand it’s more than the visual map on the main website.

There is a round-up of #odcamp links to blog posts, newsletters, and photos that cover the sessions including the ones I didn’t lead. For me the Saturday was particuarly good just to meet and talk to people who care about and understand open data. Brilliant to see some familiar faces from OD Camp 1, and friends within the geo data world. Thank you to Giuseppe Sollazzo for the photos that I’ve used in this post.